knitting in on my morning bus ride

Just finished up a project–baby blanket in chunky yarn. 4 months late, I guess not too bad considering. Although I forgot to take a picture of the project. Maybe I can get with baby. Started a new project some beautiful yarn that was a gift–hand dyed white with blues and purple. I’m doing a feather and fan pattern with 2 gater stitches in between each repeat. Needed a pattern that I could remember because I put my projects down so often. I’m liking how it the coloring is playing out. The yarn has a bluefish cast  because I shot it on my bus ride to work. Lighting was low on the 6:27 bus. 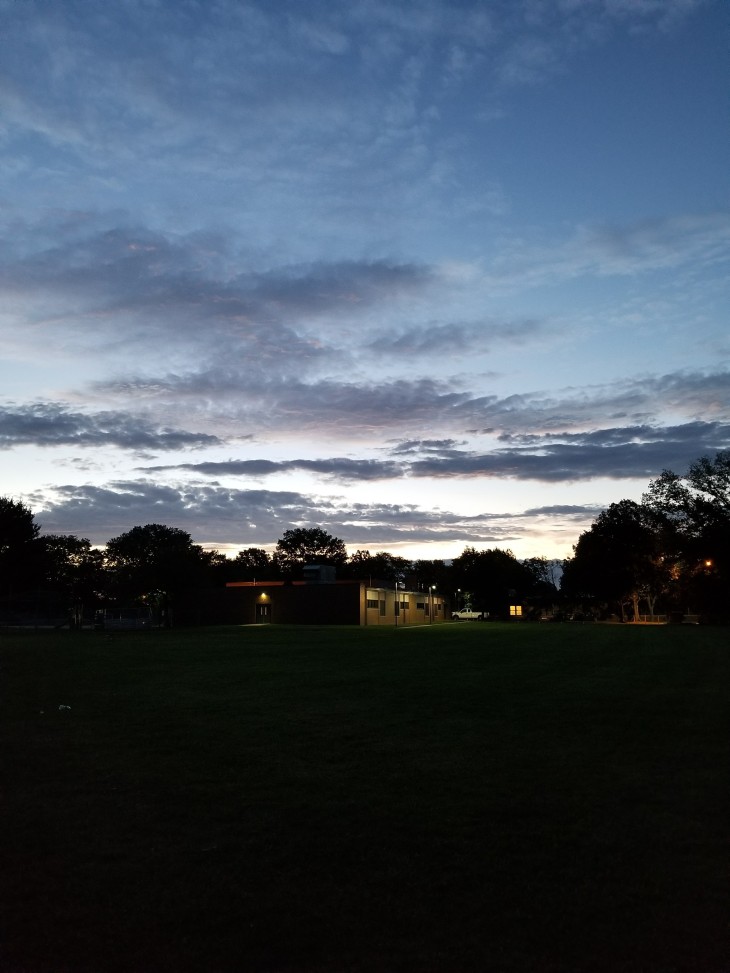 example of the morning light–from morning walk around 6:00am

Trying to work up the knitting fever again. Hopefully the cool weather will bring on. So much yarn in my stash that I need to knit. I’ve been trying to knit my stash away for at least 3 years. Still have about 3 plastic container full. Sigh . . .

. . . But I have I got an idea from a friend who tagged me on a FB post about Wrapped in Love , a charitable knitting/crocheting group that make shawls for the families of organ and tissue donors in NJ Sharing Network.

NJ Sharing Network is the group who handle Oat’s tissue donation. And I was thinking it would be nice if I could do something for this organization and why not use up my stash to knit up wraps for the donor’s family. 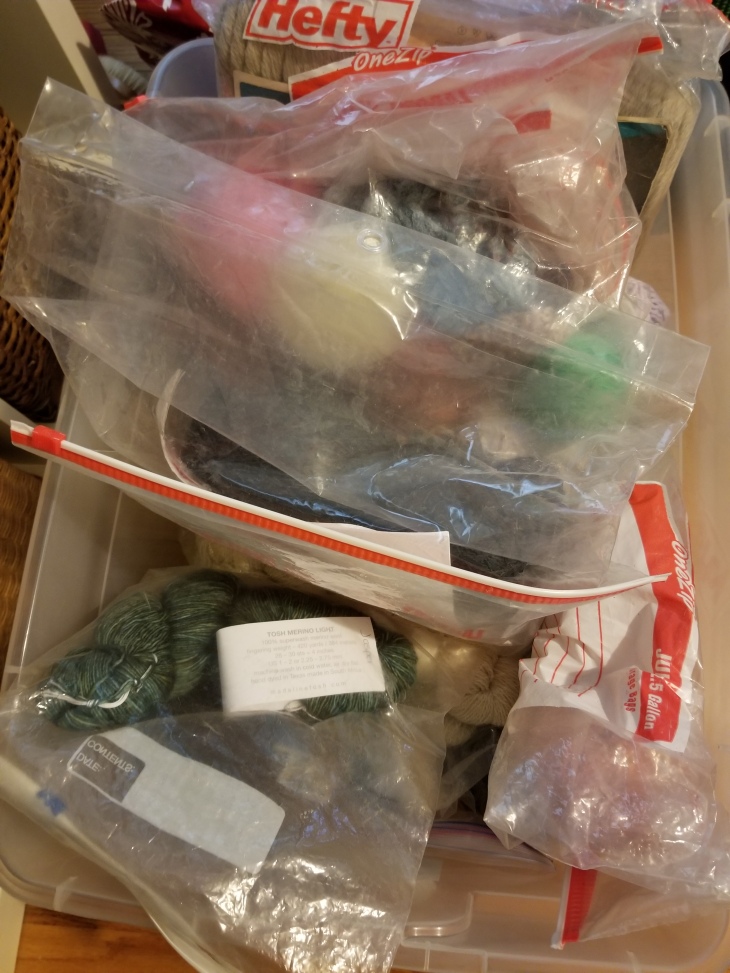 I was thinking of doing a knit-a-long but to be truthful I’m lazy. I just want to knit what I want and when I want. So if you want to join me and knitting a wrap or two for this group, let me know. I’m going to try my best to get a few over to them. Also if you need yarn for this project, I can send you yarn from my stash.

I’m going over to a Wrapped in Love Knit Night on October 10th. And if I gather any more information. I’ll pass it along. 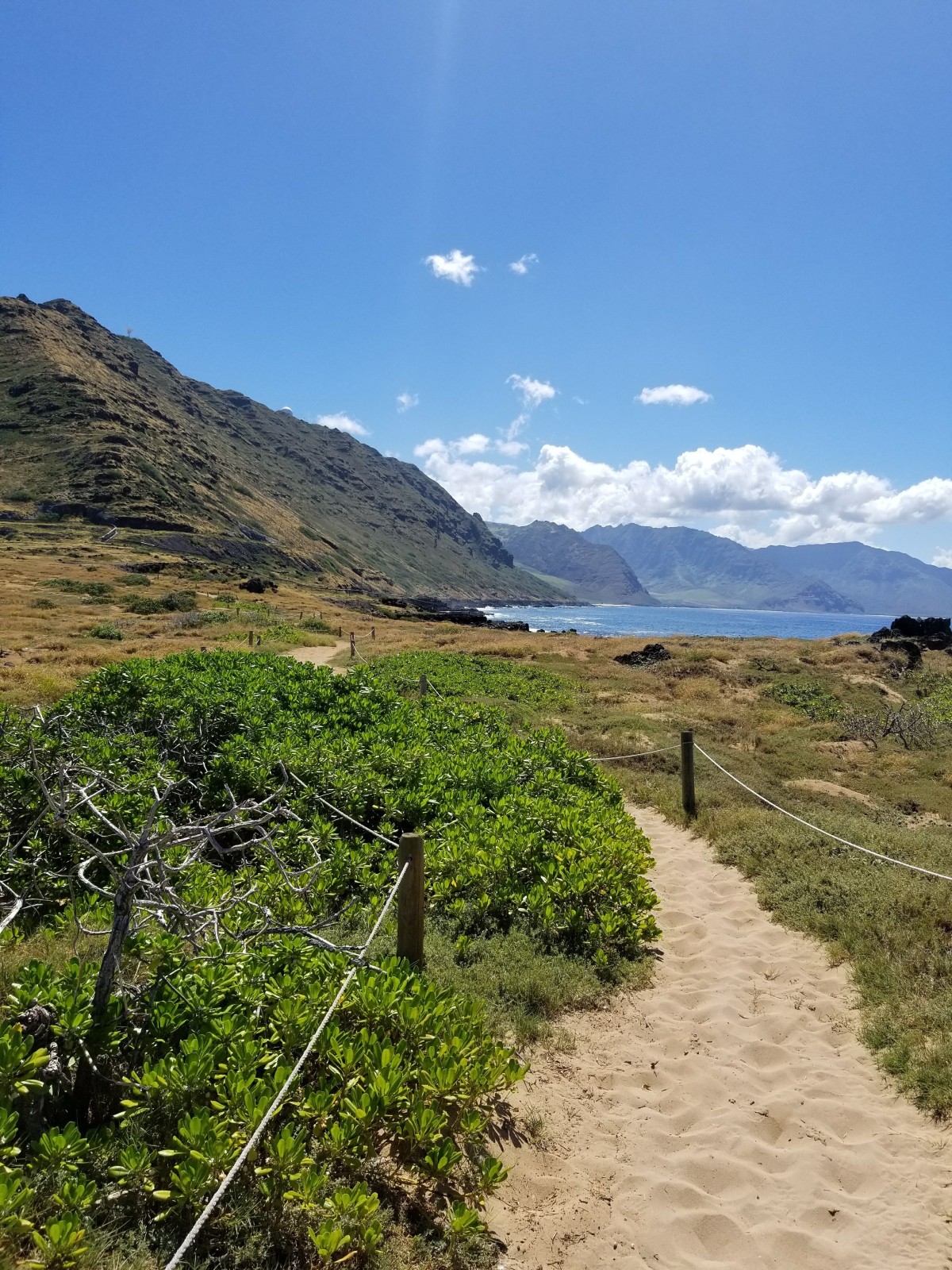 I didn’t want to make a big thing of it. I wanted to find a place that wasn’t crammed with people. Then I thought about the west-side beach and Kaena Point. When I mentioned this to my friend, Janice who has been in a halau for the longest time and is my Hawaiian culture expert, she said that Kaena Point is a place where the spirit jumps or travels to the other side. So that was my ocean spot.

The start of the trail

Oat and I have been to Kaena Point a couple of times but we did it from the North side/Mokuleia. It was usually the the first hike we did when we got in. It was flatish, no giant uphills, great for the jet lag travelers. And you get to see so many monk seals, albatross and the beautiful coastline

I picked Tuesday, September 5 to go out because it was after the holiday weekend. I figure it would be less crowded then. I wasn’t going to ask anyone. I thought people were busy and I figure I could walk it on my own. But a couple of friends asked when I was doing it and that they wanted to come along with me.

I had no plans how to do this. But luckily, the great friends that I have knew what to do. My friend Allyn, the engineer and project manager of the group, had a plan. She had picked ti leaf from her yard to make leis and Janice showed us but basically made them for us because she was so good at it.  Allyn also picked plumeria and puakenikeni from her yard.

The crew L to R: Jan, Alan, and Allyn

Meet at my parent’s house at 7am, Jan, my friend from 1st grade, to pick up Allyn and Alan, her handy husband  (he also came to check out my parents bathroom–need a small fix. See how handy).

We packed up the van and off we went to the west side of the island, past Yokohama Beach–such beautiful under used beach–to the end of the road.

Walk/hike is on the flat side. You walk along the coast with beautiful views of the westside of Oahu. The trail is on the old railroad and you still can see some of the wooden ties on the trail. I can only imagine what it was like riding the train back then. What a view it would have. 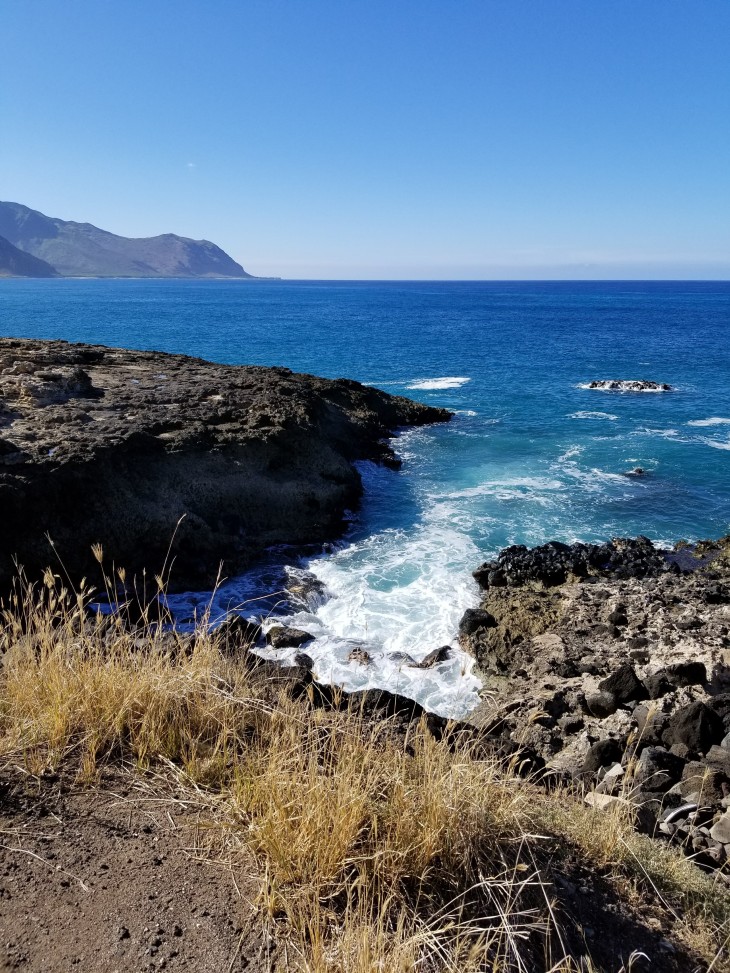 My cousin told about the tidal pools and we could go swimming them but to watch for the wana (sea urchins). Allyn said underneath where the wana, that where the opihi (limpets) are. No wonder they are so expensive. 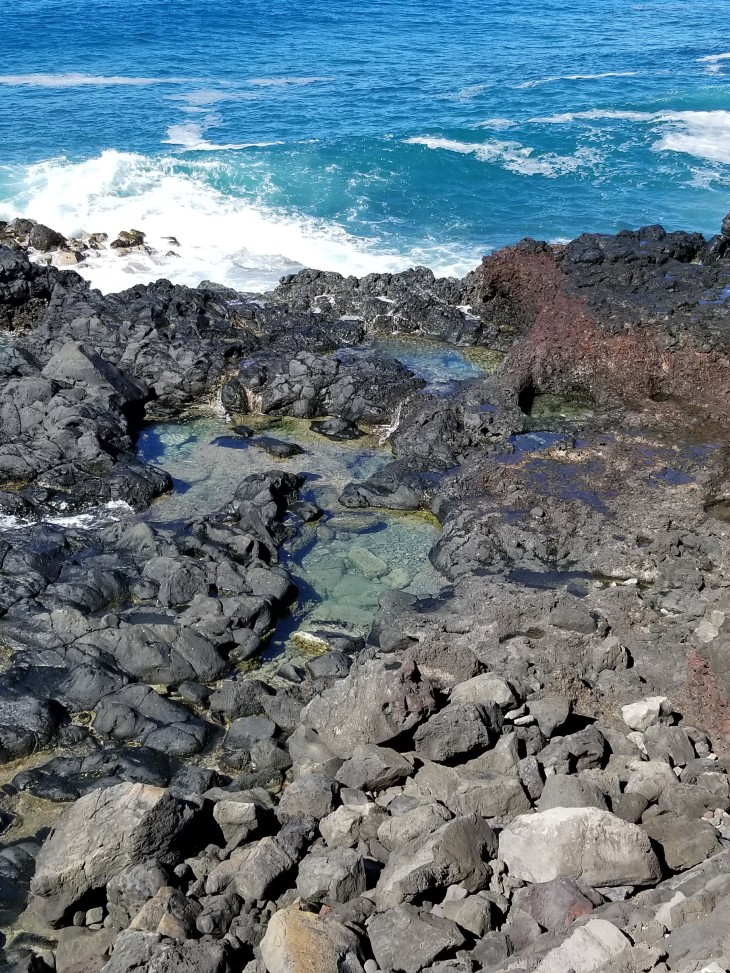 A portion of the trail had washed out or eroded away and there was an slight detour that lead us up the side of the mountain for a bit (not so bad). Then you have to pass through a gated area. At this point, it is a Nature reserve.

We were trying to be inconspicuous but 4 old people, looking hot and sweating, one with a big blue umbrella, that hope kind of was dashed. There wasn’t a lot of people walking around. In the meantime, we I looked around looking for there right spot, there were monk seals lazying around in the sun. 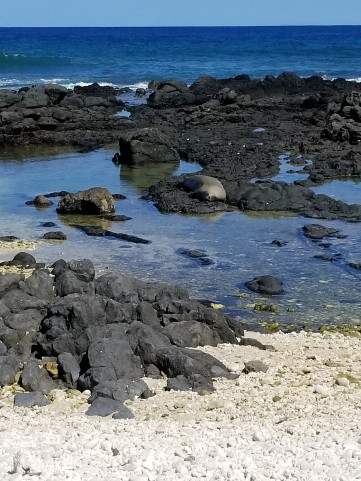 Allyn suggested to build a cairn (stacks of rock) with the white stones. I googled cairn to see what it really meant and one of the meaning was:

“a mound of rough stones built as a memorial or landmark, typically on a hilltop or skyline.”

Alan climbed up the rocky outcrop that had a view of the point. Haha, we all could have gone around the back of the rock to get to the top. That’s what happens when you are looking at the beautiful pacific ocean instead of the mountains. Once it was built, he added a ti leave lei and I added some ashes, thought it would be nice place for Oat. The view from the top of the rock was of the point and the pacific ocean. 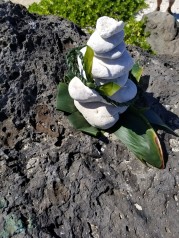 with ti leave lei and some ashes at the top

view from the front

view from the back

Alan and I found a spot where we could stand on the rock as the wave came in. Alan toss in the ti leave lie and flowers and I did Oat’s ashes. I wasn’t as graceful as I picture in my head at least I didn’t fall in while I was doing it. It was nice and I’m glad there were people with to share in the moment. I know he would love the cairn, flowers and the leis. It’s really beautiful spot and I’m sure I’ll be back again for visit.

We were on the left side because we needed stay clear of the seal on the right. There was a video of the me spreading the ashes but I can’t find it. If I do, I’ll update the post with it. Here’s a video of the cove from almost where I was standing. You can here the wave crashing and you can see the seal.

I know Oat would be happy with his ashes being spread here. I still have a bit more  that I will spread on hikes and places we loved in our travels. Thank you everyone for your support throughout this time of my life. I really appreciated and don’t know what I would have done without it. Thanks again. 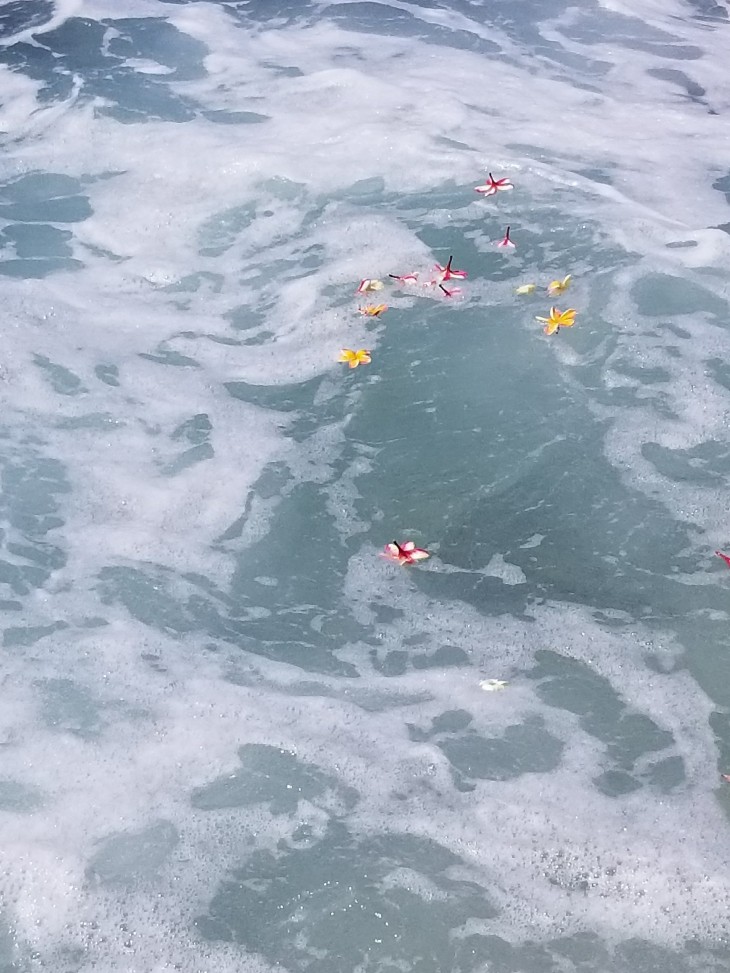 Been thinking a lot of where I would spread Oat’s ashes when I get to Hawaii. His mom said in Thai culture the ashes should be spread in the ocean. 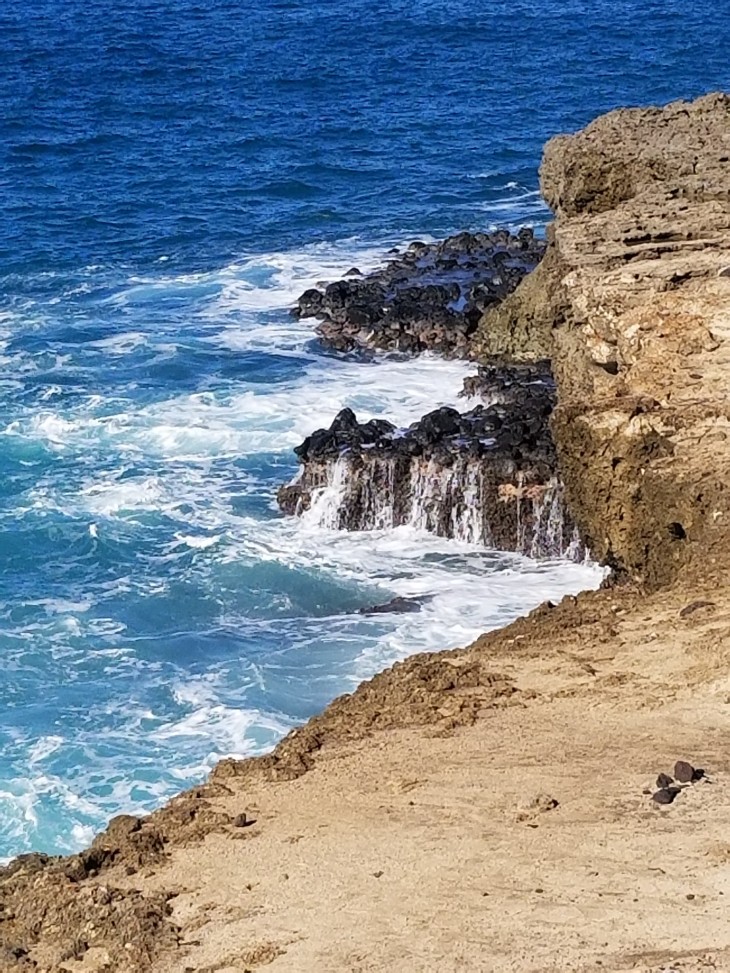 rocky shoreline on the trail to Kaena Point, more to come in part 2

I thought of having a get-together with friends and family at the beach then asking someone with a surfboard or kayak to take his ashes out.

Or going on a hike–maybe the one that we got lost on last time were there. . .

Asked my cousins if they like to go on the hike we got lost on to spread Oat’s ashes. So he could finally see where were suppose to go.  But my cousin’s hiking friend offer to get a permit for Poamoho Trail. Top 5 of hikes in Hawaii according to one of my cousins. So that was set, just wishing for good weather so we didn’t have hike in the mud.

Poamoho Trail is permit only. It takes around 10 days to get the permit and only 5 people per permit. They allow only 100 people per day on the trail. I’m so grateful for Livia (my cousins’ friend) for getting the permit for this hike and her awesome Subaru that got us up to the trail head. Our crew: Macy,  Eunice (my cousins and sisters), Jodie and Livia (part of my cousin’s hike crew)

Front L to R: Macy, Eunice; Back L to R: me, Livia and Jodie at the trail head.

[One little hiccup to the day. I left my phone in my dad’s car when I went to my cousin’s house. (I think seeing my aunt and uncle and delivering a pie a I bake made me forget). I didn’t realize I forgot it on the car until we met up with Livia and Jodie. All photos by Macy, Eunice and Jodie. Thanks all for sharing.]

Getting to the trail head

Thanks to Livia and her awesome Subaru we got up the crazy rutted dirt road to the trail head. The trail head was a 45 minutes drive with the excellent navigational and driving skills from everyone else except me (not too many off road experiences here in NJ). Thank goodness for dry weather or we would have been slipping and sliding along bouncing through the ruts.

Because they only allow 100 people on trail per day, the trail was so quiet. All you could hear was the birds, our chatter, an occasional hunters and their friendly dogs and hikers coming back down from the cabin.

rest stop to cool off

the trail (notice no mud!) 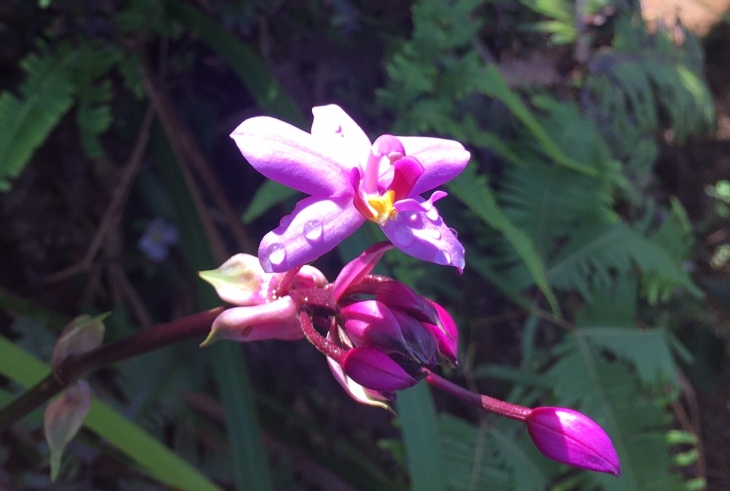 To get to the summit, I was told by everyone that we needed to go through an unmaintained part of the trail. But Iguess there has been some trail maintenance because the unmaintained trail was the most beautiful unmaintained trail I ever been on. A few muddy spots and a river crossing, then you arrive to the grassy area with incredible views of the north shore and beyond. It was pretty gusty and it cooled you right down from all the hiking upwards (a good thing for Princesshotflash).

by the river crossing 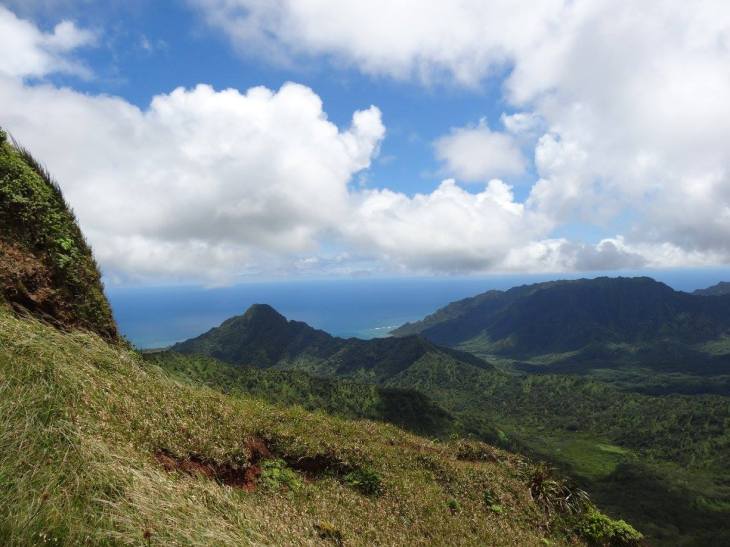 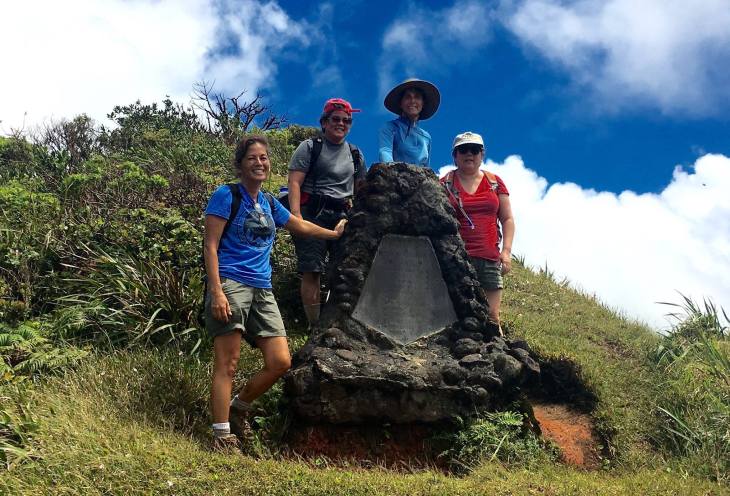 at the monument 1–L to R: Macy, Eunice, Jodie and me 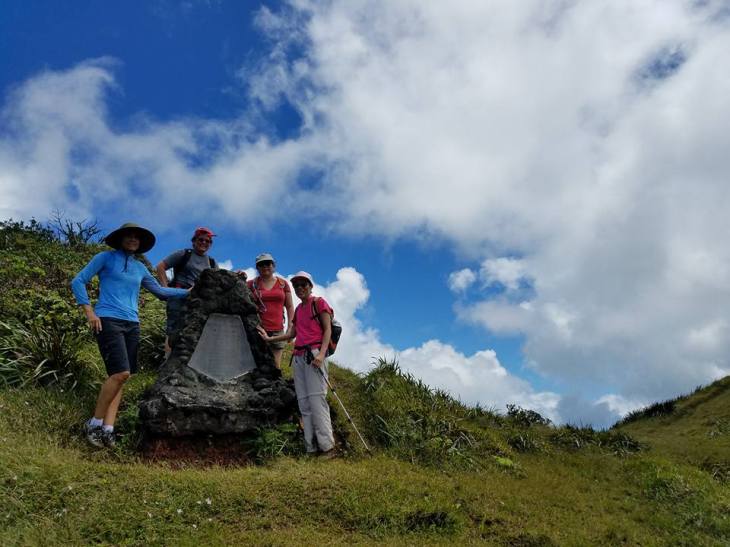 at the monument 2–L to R: Jodie, Eunice, me and Livia

I wanted to spread Oat’s ashes at the summit but was quite sure where. My cousins suggested by the monument so I’ll remembered where it was. It’s a place with such a beautiful view. I think he would have loved this hike. Will have to come on this hike again for a visit.

our view (we think that’s Molokai in the distance)

Well worn shoes from the trail

You alway think going up is hard but really going down is harder. Your legs are tired and you’re sweaty and somewhat muddy and not as fresh as at the start. 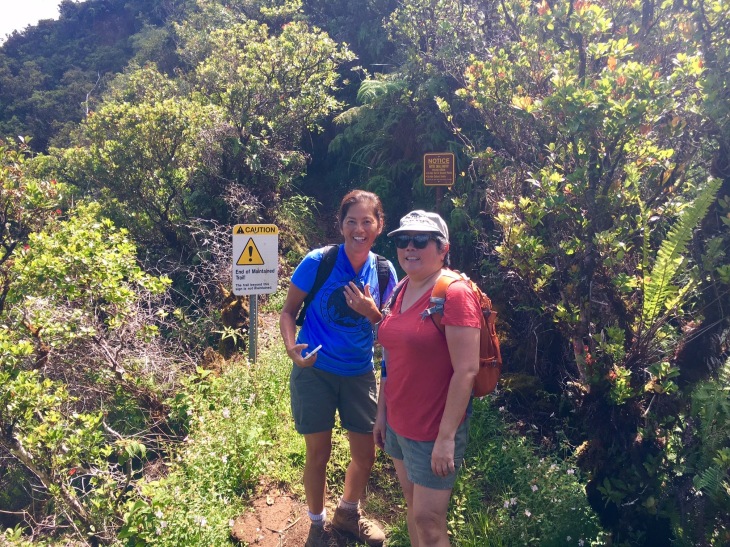 Macy and me (of course, I’m sweaty and flush as always) 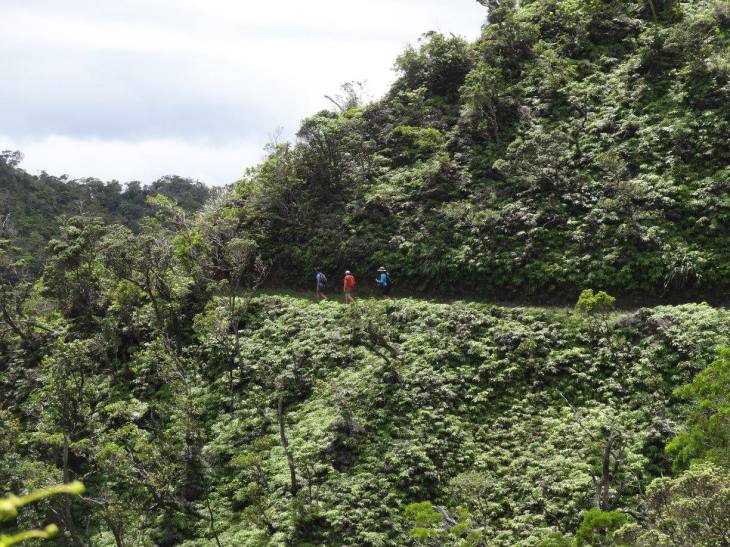 Macy, me and Jodie walking the trail

Awww! We finally made it down. What a beautiful trail. So worth the effort.

Getting hydrated at the end of the trail